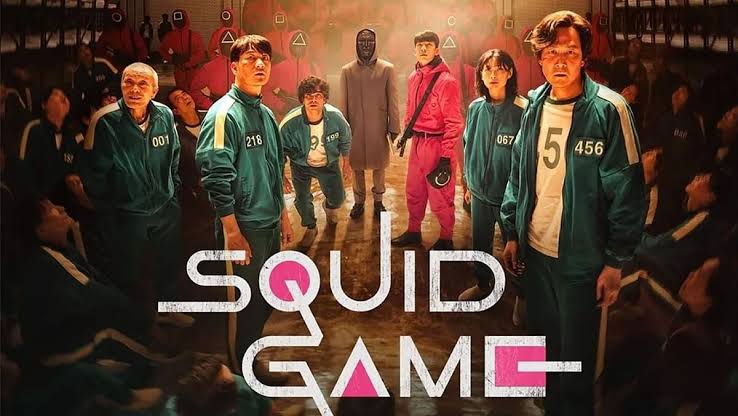 The Korean Television show Squid Game is officially the biggest on-screen cultural phenomenon. The Netflix original K-drama has managed to transcend borders with its incredible storyline and epic shock-value. Squid game is currently the most-watched show on Netflix and is on course to take the reigns as the most-streamed show of all time.

In South Korea, a bunch of people with massive debts and in the throes of financial ruin find themselves invited to a mysterious game that promises them a big payday if they stand victorious. Seong Gi-hun is one of these people. Having lost his job, his marriage and the custody of his daughter, Gi-hun lives with his ageing mother and spends his days gambling.

Gi-hun accepts the game invitation and is taken unconscious to a mysterious location, where he wakes up in a dormitory with 455 other players who are only identified by numbers on their clothes. Men in pink jumpsuits and black masks with shapes on them are the staff that manage the players.

Squid Game has come as a surprise to many, one that will glue your eyes to the screen for nine episodes straight! The originality of the idea, the visual effects and of course, the acting are outstanding and incomparable to anything we have ever seen on television in our lives!

1. Sweet is victory
In the very first scene in the first episode of this movie, children are seen playing a fun game. One thing I noticed here is that the victory of the kid on the “offense group” though not materially paid, overwhelmed the kid. In his words he said “at that moment I felt on top of the world”. This too happens in the football games young children play domestically; although for fun, the feeling of victory can not be under told. From this I learnt “Victory is always Victory no matter the circumstance and the prize won; it should be satiable”.

2. Consistency
If 47 year-old Seong Gi-hun, had quit playing the game with the stranger he meant, on receiving the lots of slaps from him, then he wouldn’t have experienced victory at last. Like I said before, ‘Victory is Victory’; you can see how Seong Gi-hun forgot about the handsome reward of 100,000 won that attracted him to the game-he was just bent on returning the hot slaps he was given. I learnt “No matter how many times we fail, one win clears the failures”

3. Inverse motivation
Sometimes we get motivated to win, just to prove someone wrong. At first, Seong Gi-hun was lured into playing ddakji by the handsome prize he would be given if He won. But later on, after failing lots of times and receiving slaps as compensation for his inability to pay his opponent as agreed, his mind drifted from the prize to be won, to returning the slaps back to his opponent. I learnt from this scene that “The greatest drive that push a man to the top, is when he is made to defend his esteem”.

4. Unforseen positivity
I must admire the confidence and bravery of Seong Gi-hun to accept playing ddakji with the man that approached him. Although he had no money on him, he accepted to pay 100,000 won if he failed. Such bravery; such risk. I learnt: “We should be brave enough to take risks when necessary; our rewards comes sometimes through heavy risks”.

5. Jaundiced
without allowing the strange man speak, Seong Gi-hun just assumed that the man was a Christian on evangelical mission. If the man wasn’t persistent enough to explain himself, Seong Gi-hun would have believed he was a preacher. I learnt “assumptions are not facts!”

6. Trust but verify
Seong Gi-hun went to visit his friend and was told by his friends mother that his friend had traveled abroad for a business trip and was making it big in life. Seong Gi-hun felt a little bit intimated and was in a state of “make them cut soap for me now” he started recounting how he took the guy to school when he was younger. Only for Seong Gi-hun to discover his friend was a huge debtor and was also a partaker in the Squid Game and had never left the country. I learnt “Although some stories are true, we must learn to confirm that our love ones are safe and most importantly know everyone has a problem underneath his chest”.

7. Be kind but with sense
The Bible says we shouldn’t be too wise nor too foolish: that is to say “too much of everything is bad”. Due the “green light; red light game”; the first game that was played by contestants, on a normal circumstance, a foolish person would have tried to rescue a shot participant and get himself killed too. I learnt “use wisdom in all circumstances”.

8. Save a life when opportune to
Seong Gi-hun would have been eliminated in the green light; red light game but he was saved thrice. First, by using his wisdom to hide underneath a dead body during the chaos and uncontrolled shots. Second, by his friend who advised him to get up and try reaching the finish line, if not he would be killed. Third, by the unknown player who held him from falling when it was time for them to remain still. I learnt “everyone can help another in the very way they can; no excuse! And also, helping involves sacrifice”.

9. Be calm during chaos
Green light; red light, being the very first game they played, the contestants didn’t understand what the instructor meant by the word ‘eliminate’. When they discovered it meant death, there was chaos which led to them forfeiting the rule of standing still and got their selves killed. I learnt, “in the very possible way we can, be still when there’s chaos; fright can only make things worse”.

10. Love is sacrifice
Seong Gi-hun wasn’t ready to play the squid game just because of earning money to flex or pay debts, so he just kept the business card of the facilitator in his pocket. Not until he reasoned that his daughter would be leaving the country with her stepfather and mother to the US; he couldn’t claim his daughter legally if he was financially buoyant, hence he needed to play this game to get quick money. I learnt “Relationships are the very important sacrifice one could struggle to keep”.

IF THEY WANT YOU TO CHANGE, THEY DON’T LOVE YOU FOR WHO YOU ARE