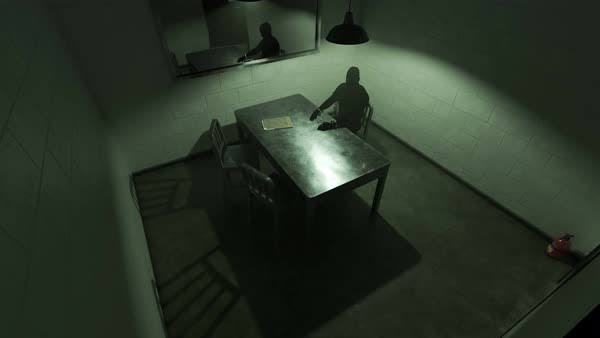 Escaping was an option but it wasn’t possible, so I had no choice but to stay calm because the interrogation room was one of a kind. Thick walls, relatively dark inside with a strong-rayed light focusing on me. In a quick glimpse around the corners, I could notice cameras and recorders fitted around the corners. While still scrutinizing the room she interrupted, asked if I wanted a drink, which I needed badly, just unlucky that they didn’t have my type, I was served anyway, a black coffee.

“You must be scared by seeing all the cameras and microchips in here, I am scared too (giggled).” She remarked in a sarcastic but tough tone. “The deal is so simple; you answer my questions diligently and we’ll definitely be friends.” She paused, pulled a file from her briefcase and sipped her drink. “You got lucky that Max pulled through, but still not that lucky, we realized he wasn’t one of the hostages, from the many witnesses that we questioned it was clear that it was a robbery gone wrong. Currently he is assisting us with the investigations to bring your other mates to books.” She informed me. The cross examination took longer than expected, however, something was clear, she was a different type in that badge, I bet her colleagues never approached her for small talks, it baffled me how she’d smiled back then when I first saw her.

She was learned and knew her thing, her beauty was a match with her brain; both were out of this world. All this time I didn’t bring up about us ever meeting before, after all I wasn’t so sure if she could recall, she was sleuth who met people of all walks, from drunkards to cannibals, I just happened to be one of them. I was informed of my charges and so many arrest warrants issued before, from a fraudster to a gangster, how could I miss to be on their radar? However how tough she proved to be I wasn’t going to let her take me down, not that easily.

“Why didn’t you take a shot whilst you had the chance to?” I finally asked, it sounded stupid nevertheless I asked it. For a moment she was shocked like she didn’t expect that, she slowly walked out and came back with an unlabeled brown envelope, after which she ordered for a stop in recording of the cross-examination process. I was curious. She was up to something, she emptied her cup and cautiously unveiled the envelope’s contents. It was a gun I clearly recognized, the one I used in the church heist.

“This was a part of the evidence though not recorded, a decision I can subvert any moment you misbehave with me. You know how much weight that can bring to your case, right?” She warned, pushing the unloaded gun gently to my side. With no cameras no recorders, she assured me that it was the safest moment to talk. “Where were you on the night before 27th December, 2019?” She asked, well I had no clue where I was at on that day, I mean who on their right mind can remember exactly where they were on such a date? Then she continued, “On that night, someone was shot dead at his house. I ran a check at the bullets used and found out that they had the same serial number as the ones you used recently. His case still remains unsolved and was a mystery until today when I discovered that it was you.” What followed was a moment of silence, I couldn’t believe it, me? Shot someone?

I camt wait for chapter 10