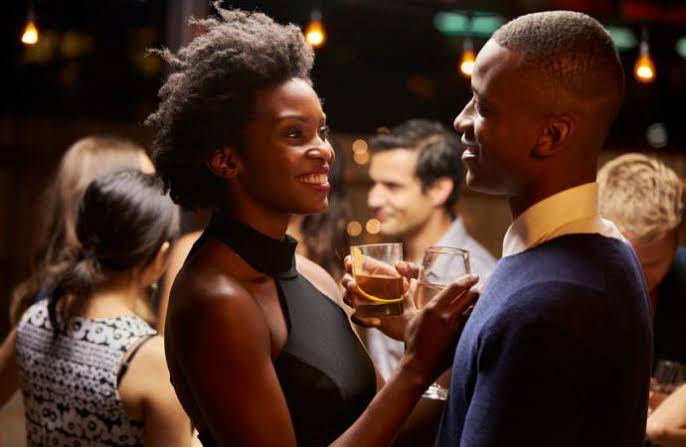 She sat a lone at the table in the far end, sipping on her sangria. I could clearly see that her ring finger had nothing on it everytime she lifted her glass towards her red lips. I would wish to mention her black minidress but instead lemme talk about the fleshy thighs that had been exposed, thanks to the minidress. A massive flower tattoo chilled innocently on the right thigh, like it owned it.

She was either waiting for a friend, or here to meet someone. Girls just don’t sit idle in the clubs, not in Nairobi, they always have an agenda.

From my table, I sketched in my wits how I could make the moves. She looked like those girls that you had to chase persistently till she is convinced you are genuinely in love with her, or drop a bunch of scented flowers at her doorstep daily with love notes defining your feelings.

I felt nervous. Sometimes when a man sees a pretty girl, the bladder reacts – you immediately feel pressed. I walked to the gents to debank the nervousness.


With confidence in my sleeves, I swaggered to her table then dropped my ‘grenade’, “What’s a fine girl like you doing in such a place.”

She looked up, a grin flashing on her face.

“I was actually wondering what a fine guy like you was doing here.” She retorts, with a whisper voice like that of Arianna Grande.

“What am doing here? I knew I’d find my soulmate here…today, sitting alone, waiting for me.”

“So, can I join you here we get to know each other, glass after glass, and prolly call my cab guy to take you home from here?” I asked.

“Yes, that’s a good idea…but” she pauses then looks behind, “You’ll have to ask that guy there, he is my husband.” Pointing at a huge dark guy standing near the entrance – a bouncer.

My break up was terrible, yet petty. I was dumped because I love memes. Not necessarily that I love memes, actually. I spend lots of my time online viewing WhatsApp statuses and forget to reply on time. He decided to jump to conclusion that I am busy entertaining someone else and not giving him attention. I was dumped and blocked everywhere even before I could explain myself.

That’s not even the story for today.

I was at the club nursing my heartbreak. I like my sangria cold – with at least 5 ice cubes in it. I enjoyed the background old school hip hop, and the dim light just made it perfect for my state.

From a distance, my eyes met of a guy in suit and tie. He was sitting a lone, absendmindedly staring at my legs. I ignored. I only had time to heal the wound in my heart.

After a while, I glanced at his table again but he had disappeared. The table was empty, as if he was some ghost from those horror movies.

“What’s a fine girl like you doing in such a place.” A croaky voice thundered in my ears. I looked up to see who the owner of that thunder was. It was him – the guy in suit and tie.

“I was actually wondering what a fine guy like you is doing here.” I replied, attaching my voice with a whisper that always turned my ex boyfriend on.

He was confident. More than I had anticipated. He knew how to play with words, though I felt like he was rushing things – he had already scripted how the night will be and also how his cab guy will come take me home. I am not that type of girl. He had to earn it.

I knew what his motive was. I had to play my cards right before he could win me in my own game. “…you’ll have to ask that guy there, he is my husband.” I said pointing at a random bouncer. I knew with that, I had bruised his gangsta points.

ESCAPING THE CAPTIVITY BROUGHT BY DEATH

MY LIFE WITH ANGOLO