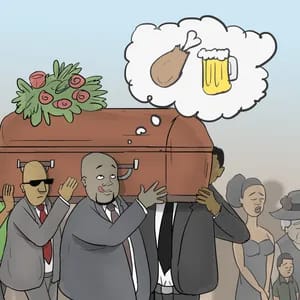 Y’all know Solomon. No. Not the Solomon Soloo your mutura guy. We all know him. His mutura is pristine. But you don’t think we would be gathered here talking about something as mundane, however delicious as mutura, do you? I’m talking about Solomon son of David. The guy from the Bible. Remember him now? Good.

King Solomon is supposed to be the wisest man to ever walk the face of the earth and his conjugal prowess was rumoured to be exquisite. Ask the queen of Sheba, she knows best. Sorry, you can’t, she’s long dead. Am I digressing?
Now this valiant man Solomon, owner of all wisdom and conquerer of all thigh lands and every other land in the nether regions authored a book that would later be dubbed Ecclesiastes by the leaders of the church.

In this book Solomon writes and I quote, “Naked a man comes from his mother’s womb and as he comes so he departs. He takes nothing…”
Now I’ve roved this village for decades and I can tell you with immutable certainty that the last bit of Solomon’s wisdom might not be exactly true as far as this village is concerned. Because here when people die they take things with them. Lots of things.

Dead people, nay, funerals take a lot of cattle from my village. And when I say cattle I don’t mean one or two emaciated cows that have seen better days, that would be preposterous! But who would even attend a funeral where less than ten bulls have lost their heads? Who? Even Nyawawa won’t take that funeral seriously. People must engage meat in a duel lasting for at least one month. It’s very difficult to mourn a whole villager on an empty stomach omera. Very difficult! So we slaughter bulls. Many bulls. Because we must mourn and not only in tears but also blood. Animal’s blood. The blood appeases our ancestors and assures the deceased a peaceful transition to the afterlife. The meat appeases our body.

But animals are not the only thing funerals take from us.

Funerals take a lot more. It takes our virginity. You laugh but it’s true. My friend Larry here lost his virginity in a funeral (don’t worry bro, they won’t know it’s you). When someone dies we have this thing called disco matanga. If you don’t know disco matanga there’s no way I can be of any help to you. This is one of those things you have to experience to understand, you know, like sex. You can’t expect a virgin to understand the experience of having an intercourse with someone who has body features they don’t. A disco matanga is basically organized for hormone ravaged members of the society to run wild and free through the night. There’s a lot of dancing, drinking of everything not allowed in the BBI and of course breaking virginity. People must show the deceased what they are going to miss in the afterlife.

Now I’m going to get very emotional on this one. The last funeral that occurred in this village took my sister with it. My sister! Once the deceased was laid to rest my sister was nowhere to be seen. Because that’s what funerals do, it takes other people’s sisters. And what perpetrate this vile monstrosity the most are these people called in-laws. They come stuffed in a lorry and most of them are young single males looking for equally young fit birds to trap. Like my sister. And so many other sisters. So these in-laws would be there pretending to mourn, all the while making eyes at our young unsuspecting girls. When they leave, they aren’t alone.

In my village funerals take things. The deceased don’t die alone. Solomon was wrong, tell him I said that.

A VICTIM OF A MISPLACED TRUST

Bro you have anikad me livelive😂😂😂 but issokay..as always you have a way of passing you info. This is a great one mate.