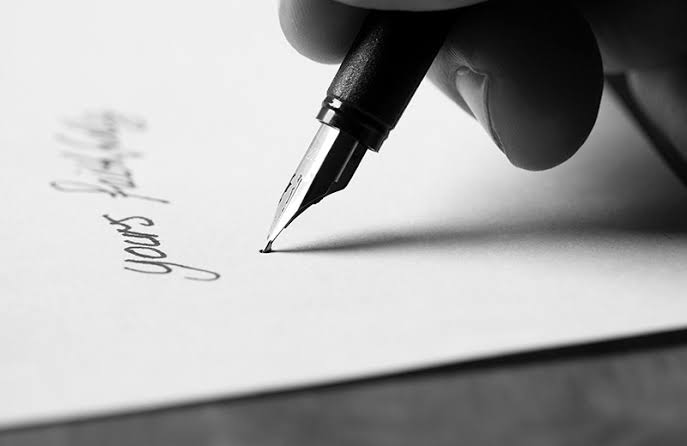 ON MY LAST BREATH

Dear Lakech,
In the name of the almighty, supreme being and mother of all creations, I do not know if this letter will get to you before I’m gone. Indeed I do not know if it will get to you at all.
I have envisioned a million possible ways you would react upon receiving this very unusual letter, but in truth, I can’t really be sure. Seeing that we’re but strangers. You and I. Still I couldn’t leave this cruel godforsaken world of the wretched without atleast saying goodbye to you, little sister.
That you’re alive I have no proof, but somehow I’ve always known you are. Like an inkling itch of an old wound.

I’ve missed you Lakech, taking solace only in the hope that perhaps wherever you are now, you have found as much peace, love and happiness as this world allows.
Wait, Lakech, do you still identify with the name? You would never change your name would you? Thinking fondly how you did smile from ear to ear whenever Baba called you. Do you remember him? Baba? I doubt you would. You were only six when you last saw the old man, may his soul rest in peace!
But I still remember your little delicate fingers, your gagged laughter and the light in your eyes. Light that never dimmed even when Mama and Baba contracted the disease and died within days as we watched helplessly, oblivious of the turmoil that lay ahead. They said it was a miracle we were not infected. Medics termed it unusual immunity among so many other gibberish. Whatever the case we did survive, but not each other.

I know some might consider my gesture pathetic, the last crazy rumbling of a dying man as Dr. Rakish here seem to think. He’s building an argument on how fear of my coming end is compelling my brain to conjure you (my imaginations) into existence. I dismiss him with a laugh. He doesn’t believe that you really exist, just like he never believed my wife and I were married for 25 years before she passed on. My daughter believes though. She has always been a daughter after my own heart after all.
It is to her that I’m entrusting this letter. Along with a photograph of six year old you and ten year old me. The only piece of you that has stayed with me this 40 years past. I’ve made here promise to never rest till this letter gets to you. I named her after you, you know. Lakech. Though she prefers Laky or Lucky. She is all love and light this one. Just like you were sister.

Do you ever miss me? Do you sometimes jerk awake in the middle of the night, the feeling of hollowness, emptiness hovering over you like a messenger of doom. Like a vital part of you is missing. An important piece of harmonious whole. Because this has been my life this past 40 years. The memory of you biting me like an angry cobra. And the hole in my heart, I’m ashamed to admit, not even my only daughter- your namesake has been able to fill. It is the hope I’ve lived for, perhaps a delusion that mine eyes shall not close till I see you again sister. And with perspicaciousness perhaps compelled by death I now understand Baba’s words- when it is hope, it can not be false.

Lakech, do I pour myself to you in melancholic tone? Does my words bring you sorrow? I do not want your last memory of me to be of sadness or gloom. Because then this letter would become obsolete, meaningless. Having failed to serve its only purpose; to give you closure and therefore bring you comfort. To give me closure too and a peaceful death. After all this turmoil in cruelty of this world, I should say I deserve some peace in death.

And so, I’ll spare you all the gore horrendous details surrounding our parents death, the destruction this disease brought upon our already crumpling economy. Laying to waste everything it came by. Annihilating rich families and dynasties long profiting from poor families like our own- who bytheway, were not spared either. It was a state of utter disarray, anarchy unleashed upon the land. Our parents death would be the onset of millions of deaths that would follow. No one was rich enough, powerful enough or smart enough to stop this scourge.

You must have read in African history books and journals how our country allowed this microscopic enemy to take such kind of toll on us. Medical funds from WHO disappeared in fat sweaty hands of daft maggots we allowed to lead us, such gaucherie. Our borders left open to foreigners all the while knowing that doing so was putting us into greater risks.

Do you know that of the total number of deaths recorded a quarter can not be credited to the disease? Yeah, a whole whooping quarter thanks to our proud brothers and sisters in uniform. Enforcing total lockdown indeed. Well, our vigilant police enforced even a lot more than we had burgained for. Results? Vandalized homes. Buttons allowed to run freely on folks with nothing but hunger growls in their bellies. And when that wasn’t enough, they opened fire, fancying the smell of blood and open skulls.

Perhaps then you would confirm what you’ve always known. That you were born in an unfeeling nation. Among a people inured to evil and taking sadistic pleasure in suffering and loss of life.

Eventually we did win. Humanity always finds a way to survive, see? Remember the flood in Biblical times? God became so angry he let his anger drown all of humanity. Noah and his family survived. The same happened to Lot’s family when God was raining down fire upon the filthy Sodom and Gomorrah. We too survived, in a crumpled nation nonetheless.
And from scratch I managed to build a little life for myself, sister. I’m sure Baba would be proud. I can only hope you did too, in the land far across the seas.

My fingers are growing weary from this incessant dribbling of the pen. I should end this letter now. Dr Rakesh says too much strain is no good. I can do with much work, I tell him, seeing that I’m about to rest forever.

One last thing before I conclude. You should know the day that American nurse adopted you and flew you to the US remains the darkest day of my life. And yet I couldn’t help but rejoice at your escape of this suffering, your promise of happiness. Apart of me hated myself for the pain I underwent. It was selfish to want to have you share in my turmoil, sit beside me as we watch this country burn. Such an oxymoron, right?

So, now, sister, my heart is as light as a feather. May this letter bring you to me before I breathe the last of this mortal breadth, and if you should find me gone, do not cry for me sister. Because I would have left a piece of me, in this writings. May this letter comfort you in ways I couldn’t. And may it always remain an evidence of our existence as siblings. I send you all my love, Lakech. Goodbye.

A VICTIM OF YOUR SPELL