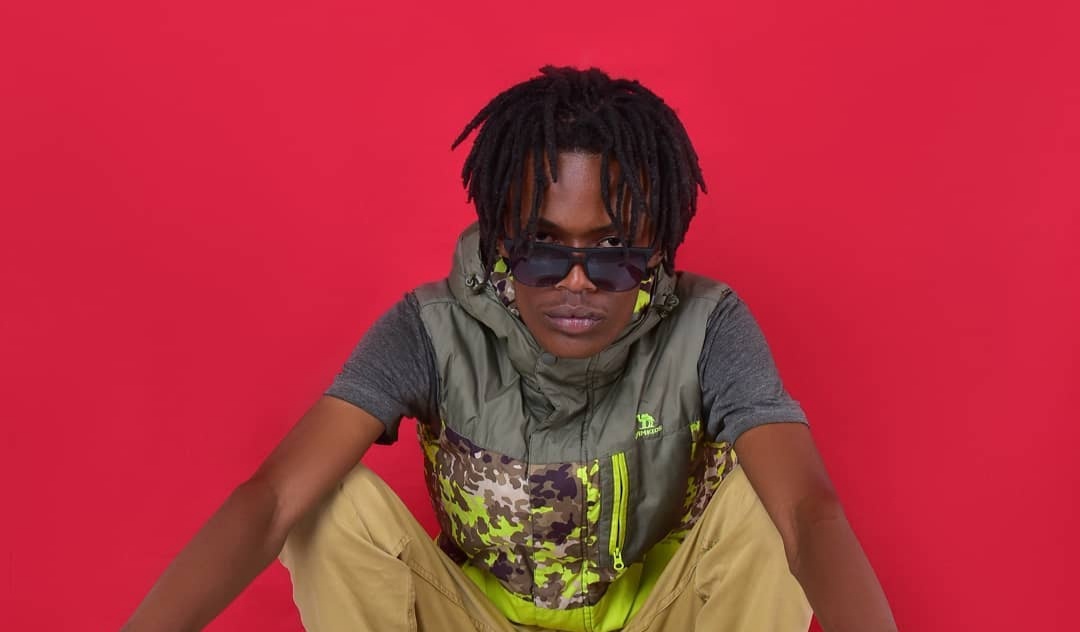 You probably saw him on Makutano Junction or maybe on Knowzone. You might as well have seen him in Toto Millionare years back, or jazzed at his amazing hits. Mungai Mbaya “Moonguy”, has been in the game since years of yore. His authentic art and talented mavericks is what keeps him glued to his passion. He is, with no doubt, ule m-baya, quite literally. We catch up with him to sip on his trail of music and acting.

Tell us a bit about yourself

Alright, So you can call Me MoonGuy – which is derived from my actual name Mungai. I only use this artistically though. I’m a 22 year old artist, rapper, writer and actor. Currently mainly a rapper, but I actually started off as an actor. If you’ve watched Makutano junction and Knowzone you probably know this.

As for my music, They don’t have a name for my genre yet but It’s a form of fusion that encompasses all my musical influences in one. Be it, hip hop, trap, dancehall, Genge and a lot more. It’s still evolving though. I’m working to bring a really solid sound to the game. That’s basically MoonGuy.

You have said you started off as an actor, how was the experience in the acting industry?

First, it was fun! To date acting has given me some of the most memorable experiences ever. It took me from a village kid to a nationwide sensation. I owe a lot to acting which is why I’m always available for acting roles should they arise.

Second, Very Educational
The industry really gave me a lot of exposure. Especially back then and furthermore as a kid. I mean you’re really earning big, at like the age of ten you could pay your own school fees. That made understand the life that lay ahead for much earlier than peers.

Third, it was challenging.
What most people don’t get is acting is a job just like any other. And it’s hectic, tiring and as frustrating as any regular job. It involves working really late hours. Clocking in at dawn just like everyone else. It really ain’t a bed of roses. It’s also really underdeveloped. It has alot of potential in terms of talent, skill and creativity, but really lacking in opportunities and appreciation as a career. Hopefully, this changes as it grows.

That’s impressive. You are now into music, and recently, you dropped a song titled ‘Wale Wabaya’ featuring your brother, Tyler Mbaya (well known as Baha), what was the inspiration behind the hit?

So wale wabaya was us kinda reminding people that we really do this art thing out of passion and as a calling. It can be classified as a gengetone time but only based on the sound and beats. Contentwise we wanted to showcase something that was entertaining yet still maintained some sort of relevance in the game which is advocating quality content in terms of lyrics and musical composition in general. We seem to really lack that here. Only a few guys are actually trying.

As for the The idea behind it, it was my brother’s actually. Guys don’t know this but he was actually into music way before me. He just hadn’t seriously approached it. He used to do freestyles when we were kids. One day he pulled up at the studio after I had a session and jokingly he got on the track. It sounded really nice and he went ahead and recorded more. We’ve got three major unreleased tracks coming. So y’all stay tuned.

We decided to call the track wale wabaya coz our surname is Mbaya.
I’m Mungai Mbaya, he’s Kamau Mbaya. That makes us Wale wabaya.

You and Tyler mbaya have alot in common, from acting to music, quick question, are you twins?

If you weren’t doing music, nor acting what would you be doing?

Probably something computer related. I studied that in university for a while.

Where do you see the Kenyan music industry in the next 5 years?

At the pace we’re moving I see us having a really established music scene. We’re gonna have guys getting the proper recognition we deserve. Kenyans actually have a very active music consumption. We have a really strong audience because even Tanzania and Nigeria wouldn’t be sh*t without our audience. We just need to get people to listen and appreciate more of our music. PLAY KE BANA!!!

Which Kenyan artist are you envisioning to work with?

As for the OGs, I have Nameless, Redsan, Wyre, Nonini, Jua Cali and Khaligraph for sure. Though, if E-SIR was around he’d be top of the list.

I mainly have respect and admiration for the new school. We have a different energy.
So my top collabs would be: Zzero, TNT, Wakadinali, Kahush, Boutross, Mastar VK and Breeder for sure.

What do most people don’t know about you?

I’m really the most humble and down to earth guy you’ll ever meet, or at least I try to be.

Like I’ve realised from the gram and my music most people take me for someone with a superiority complex- in short ati mi huringa (laughs). Kizungu mingi isiwashtue. I’m easy man.

You once starred in an hilarious comedy years back called ‘Toto Millionare’ do you rewatch the movie?

I didn’t even think anyone remembers that. Yes, I rewatch it from time to time just to see how far I’ve come.

If you were to choose between music and acting, which one would you whole heartedly stick to?

Honestly, I’m more of an artist to the core. It’d be really painful but I’d have to drop acting.

Which international musician do you admire?

I admire Travis Scott. At one point he was sleeping on his producer’s couch. In less than 5 years, he has established as one of the most talented artists of our generation.

If you could change anything in the past about your career, what would it be?

I would have started rapping way earlier than I did. I didn’t challenge myself enough early on. That’s the only thing.

What is the best advice you’ve ever received?

Best advice I’ve received… I think for me it’s basically how my parents raised me. The lessons they taught me directly and indirectly. They’re the main reason I am who I am. They helped me know and not forget who I am which so far has been the best piece of advice I’ve ever gotten anywhere.