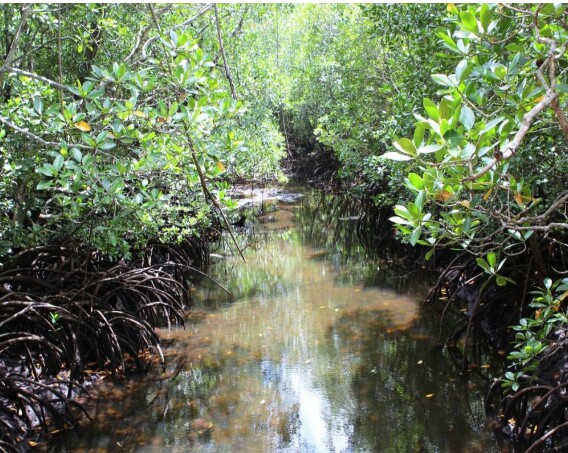 It’s class time,let’s discover how we can survive hurricane attacks through the most simplest but very crucial approach;conserving the mangrove forest.
Mangrove forest; as known to many is a forest consisting of shrubs or small halophyte trees that grow in coastal saline/brackish water. They have a complex salt filtration system and a complex root system to cope with salt water immersion and wave action. One fact that necessitates it to grow so well is its ability to survive in areas with low oxygen concentration.

The Mangroves form two groups;true Mangroves and associate Mangroves. The distinction between the two comes in with the ability of the true mangroves to have their roots submerged in water while the latter have its roots partly or fully floating on water. That’s the little to note about mangroves as far as it’s morphology is concerned. Mangrove forest just like any other forest provide timber for different uses .It inhabits different organisms and species,hence it’s importance. You might be asking yourself why we really have to talk about it because it is just like any other forest. However,Mangroves have a special feature and importance that make it possible for for them to prevent hurricane from sweeping the whole area.
TYM’s inspiration to write about this special feature is the massive destruction of the mangrove forests along the coastline. And this brings us to our main topic today;How to curb Hurricane.
Hurricane,also known as Tropical Cyclone, is a rapidly rotating storm system characterized by a low-level atmospheric circulation, strong winds and spiral arrangement thunderstorms that produce heavy rains.
The hurricanes are named through a certain criteria that we are yet to establish. Hurricane Harvey is the latest hurricane,it swept the whole of the Coast of Texas.This how Mangroves can control hurricanes;

Mangroves cover along the coastal region of the whole world, it’s reported that the estimated world area covered by mangroves in 2001 was approximately 137,800 square kilometers, which has declined with time. The power comes through the root system and the larger surface that it covers,Now,assume that the whole coastline is covered by a thick mangrove plantation,then like any other day hurricane strikes,the mangroves will try and prevent the waters from reaching the adjacent land,it’s thickness and the string Anchorage makes it suitable for this.
A practical instance is in the village of Tamil Nadu,which was protected from a Tsunami destruction by the mangroves that planted along its coastline.The villagers are said to have planted approximately 80244 samplings and when Tsunami struck the village itself suffered a very minimal damage. So,what if the whole world embraced the idea and act of planting and conserving more mangroves along the coastlines?
The responsibility in our hands!

SPONSORS ARE THE REASON FOR SINGLE GUYS IN CAMPUS

THE REASON WHY YOU FIND YOURSELF SINGLE ON VALENTINE’S DAY DESPITE HAVING A LOVER!